In response to a question on the Speculative Evolution Forum and my previous post on the Circumstellar Habitable Zone I thought I would discuss a simple model to calculate the average temperature of a planet. I will first present a model that doesn't account for the greenhouse effect and then extend it to include an idealised version of the greenhouse effect. In practice there are many other modifications that could be made to make a more accurate model but I'm not a professional climatologist. That's what the Met Office is for!

In order to calculate how hot a planet would be based on the nature of its host star and its distance from it requires knowledge of a few physics concepts. For this reason, this post will contain more than a few equations. I imagine that some readers will be fine with this and others will not. Please let me know in the comments your opinion on this. If you want to avoid them you can just skim to the summary section at the end but do try to look at the pretty graphs along the way.

A key concept in calculating the average temperature of a planet is that of a Black Body. This was previously mentioned in the post discussing what colour are stars. A black body is a physics term for an object that is a perfect absorber of light and absorbs all light that it receives. By Kirchhoff's law of thermal radiation this means that it is also a perfect emitter.

The amount of energy a black body emits across all wavelengths can be determined solely from its temperature using Planck's Law. The following equation defines the spectral radiance emitted from black body in terms of emitted power per unit emitting area per unit solid angle per wavelength (Wsr-1m-3) 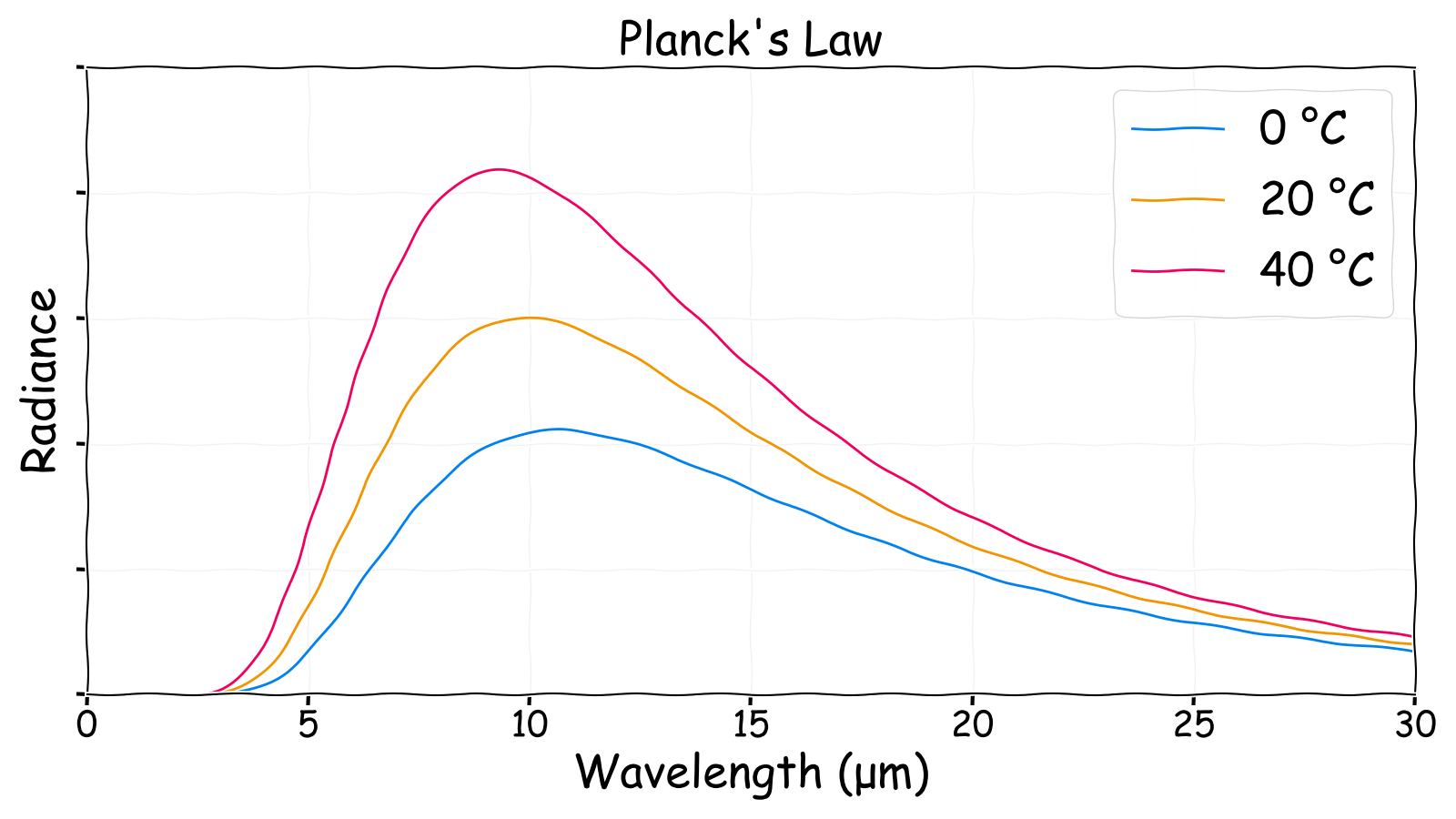 However, of more use for calculating the temperature of a planet is the Stefan-Boltzmann law. This defines the total radiated power per unit area (Wm-2) from a black body in terms of its temperature. Effectively, it sums the power produced at each wavelength according to the Planck curve

where \(\sigma\) is the Stefan-Boltzmann constant. 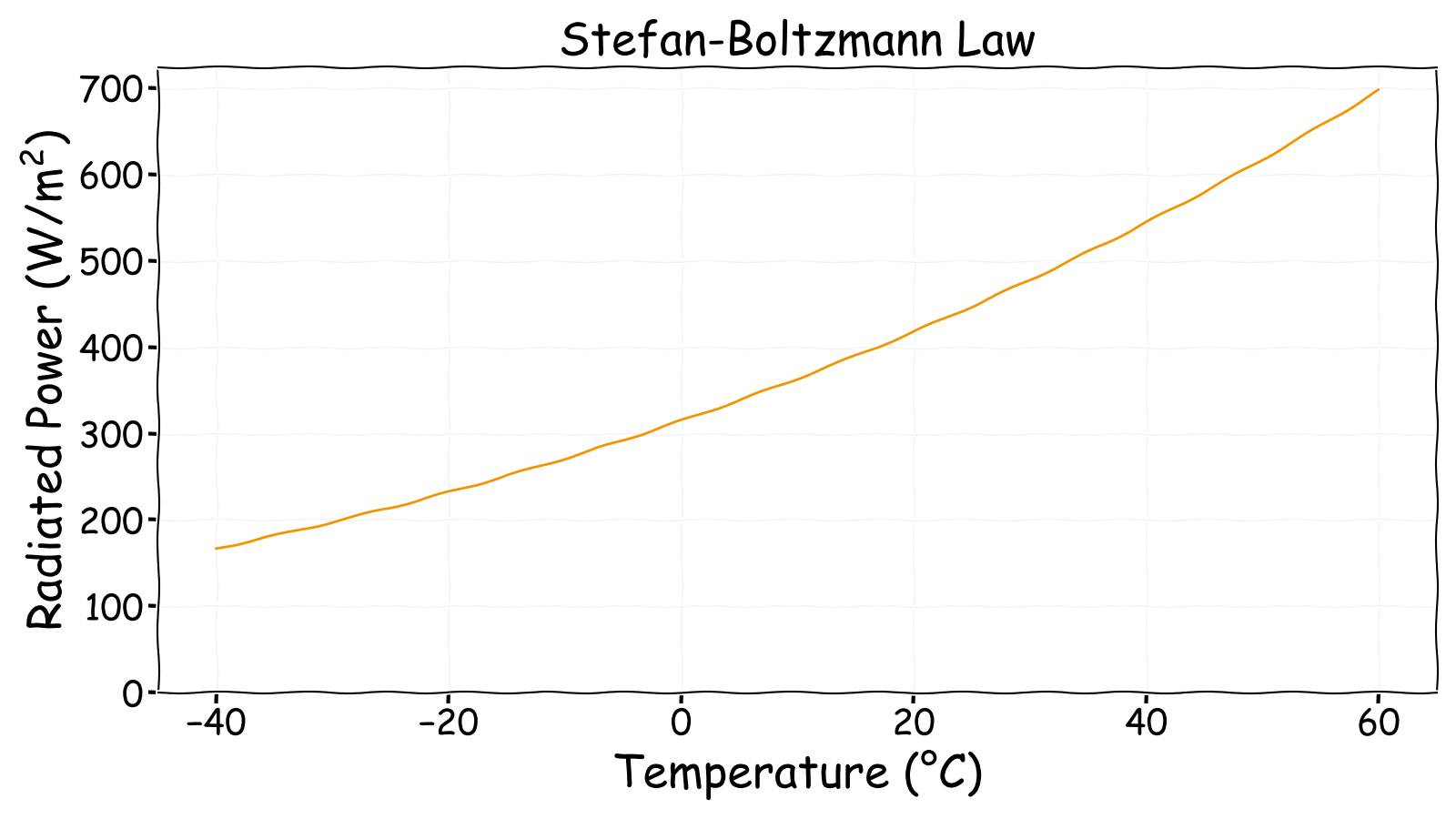 While black bodies are a useful theoretical concept an ideal black body cannot actually exist. Some objects are sufficiently close that it is accurate enough to treat them as a black body, but most objects do not absorb all light that falls on them but instead reflect some light. Since they are not perfect absorbers this also means that they are not perfect emitters.

where \(\epsilon\) is the emissivity. Many natural materials have an emissivity close to 1, so in practice the power emitted by a grey body is often only slightly lower than for a black body at the same temperature.

Of course, even a grey body is a simplification of reality. Real objects typically have an emissivity that varies with wavelength., i.e. they are coloured. However, treating all room temperature solids and liquids as grey bodies is sufficiently accurate for most purposes. Gases on the other hand have an emissivity that can vary significantly with wavelength. This is most easily demonstrated by looking at the atmospheric absorption versus wavelength for the region where ambient temperature objects emit energy according to Planck's law. 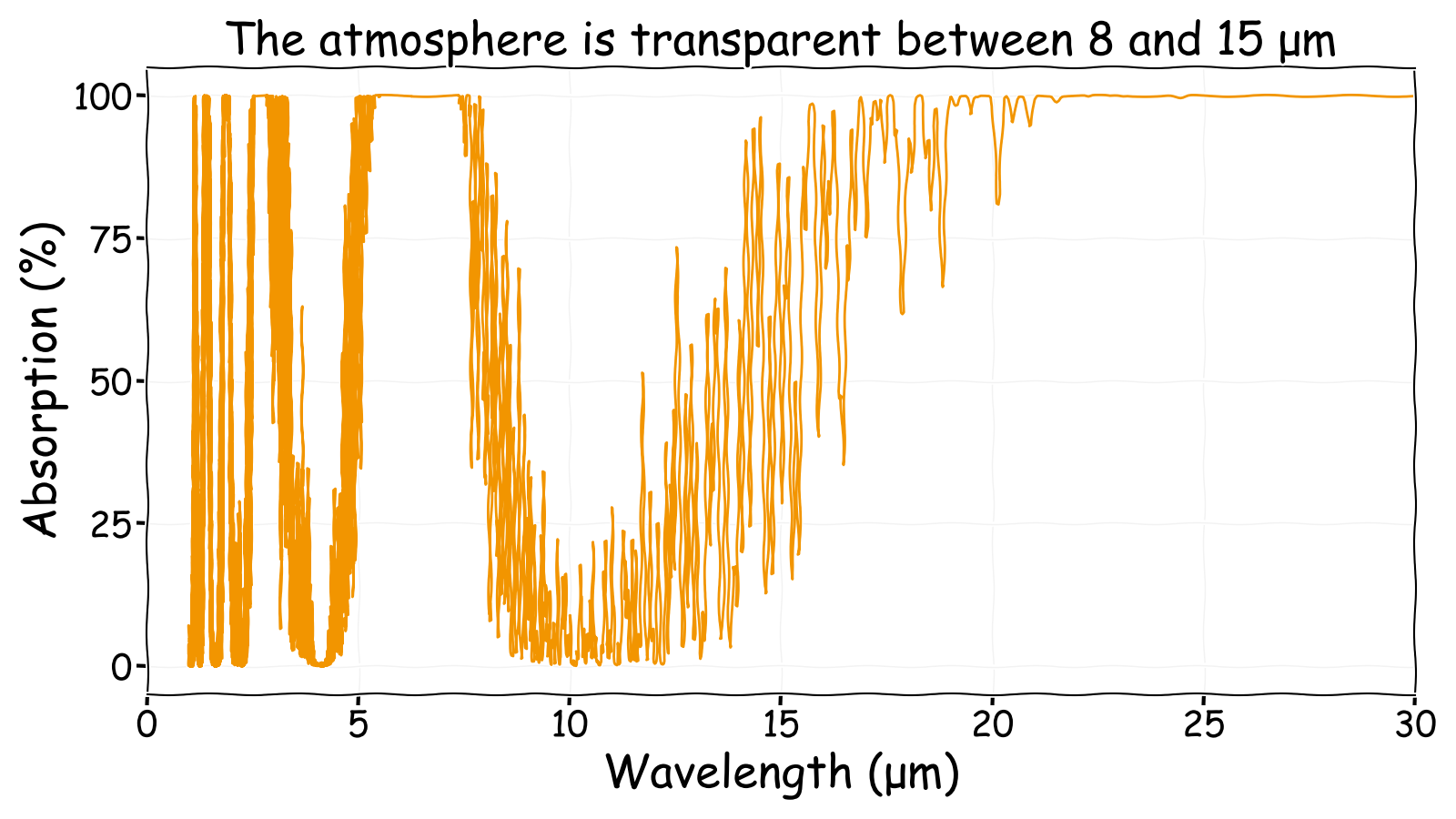 This shows that at some wavelengths the atmosphere is opaque (i.e. high absorption) and at others it is transparent (i.e. low absorption). Between about 8 and 14 μm the atmosphere is transparent and this allows the heat emitted by ambient temperature objects (according to Planck's Law) to mostly escape. However, even in this region, there are specific wavelengths that still have a high absorption. These are caused by specific gases, in particular, water vapour (H2O) and carbon dioxide (CO2) are two important contributors to atmospheric absorption.  Since they absorb the emitted heat from the surface and prevent it radiating into space and cooling the planet they are also significant contributors to the greenhouse effect.

However, a full analysis taking this wavelength dependence into account is far beyond the simple models I wish to investigate here. It is also extremely unlikely to be necessary for world building purposes and it begins to venture into the domain of professional climatology which is certainly not my aim here.

where \(\alpha\) is the planetary albedo. This is the proportion of starlight that is reflected from the planet and therefore it does not contribute to the heating of the planet. Earth's albedo is about 0.3 which averages the albedos of land, sea, ice and clouds.

The flux received from the star can be found via the equivalent of the solar constant which is the power per unit area at the point in space where the planet is. The flux on the planet is found by multiplying by the planet's cross section to get the total power received and dividing by the surface area

where \(r\) is planet's radius. and \(S\) is the solar constant. The solar constant can be defined via the star's luminosity spread over a sphere with a radius equivalent to the planet's distance from its sun

The next step is to calculate the emitting radiation. This is quite simple using the Stefan-Boltzmann law and the planetary equilibrium temperature. However, we will consider the Earth to be a grey body and not a black body so we have to include emissivity to get the following relationship:

When in equilibrium the absorbed and emitted flux are the same, so by rearranging you can get the following relationship for the temperature of the planet

Alternatively, you can calculate the planet's distance from the star necessary to achieve a specific temperature

This model can be verified by using the following values appropriate for Earth showing that an equilibrium temperature of 288 K is found at 1 AU which is correct for Earth. 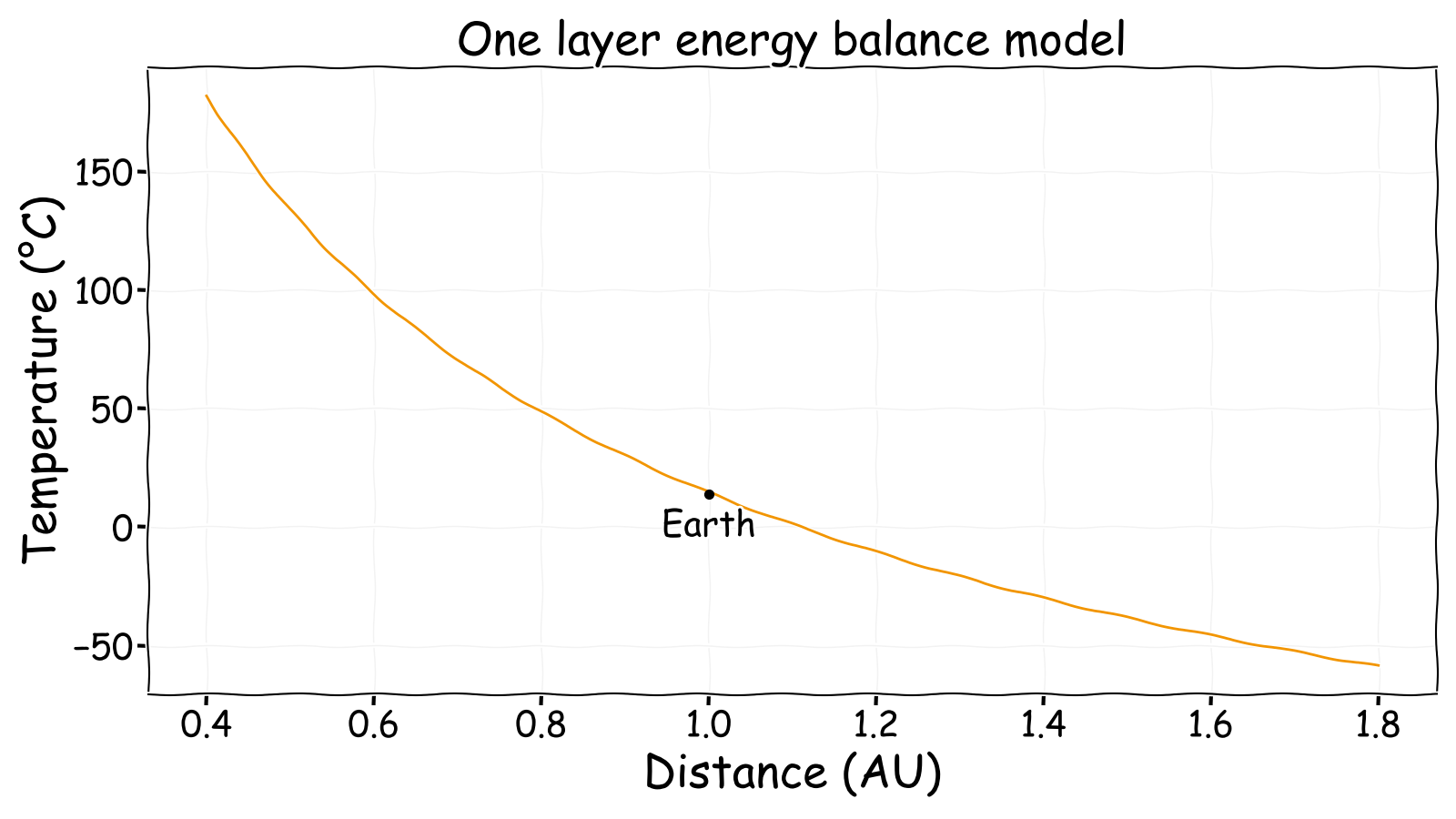 This simple model is perfectly acceptable to investigate the temperature versus distance relationship for Earth-like systems. It is also possible to change the albedo by considering some average value based on the fractional coverage of different surface types, e.g.:

An improved idealised greenhouse model is to treat the surface and the atmosphere separately. This two layer model uses a transparent-grey assumption where the atmosphere is transparent to incoming illumination from the star but is treated as a grey body for the outgoing thermal radiation. This is a valid assumption as on a habitable planet the illumination from the star will always be at a different wavelength to the planetary thermal radiation. It would only be an inaccurate assumption if the planet was a similar temperature to the star and this would clearly not be a habitable planet.

In this two layer model the incoming starlight is treated exactly as before with some fraction being reflected from the surface. Slightly confusingly, this also includes reflection from clouds despite the fact that clouds are in the atmosphere not on the surface. This does not cause any problems with the model however as the atmosphere is assumed to be transparent.

Calculating all these contributions and balancing the incoming and outgoing power gives the following equation for the surface temperature, though I will leave the derivation as an exercise for the reader...

As before, this can be rearranged to determine the distance between the star and planet to achieve a specified temperature

This can again be verified against Earth with the same parameters as before except with a slightly different emissivity which corresponds solely to the atmospheric emissivity. 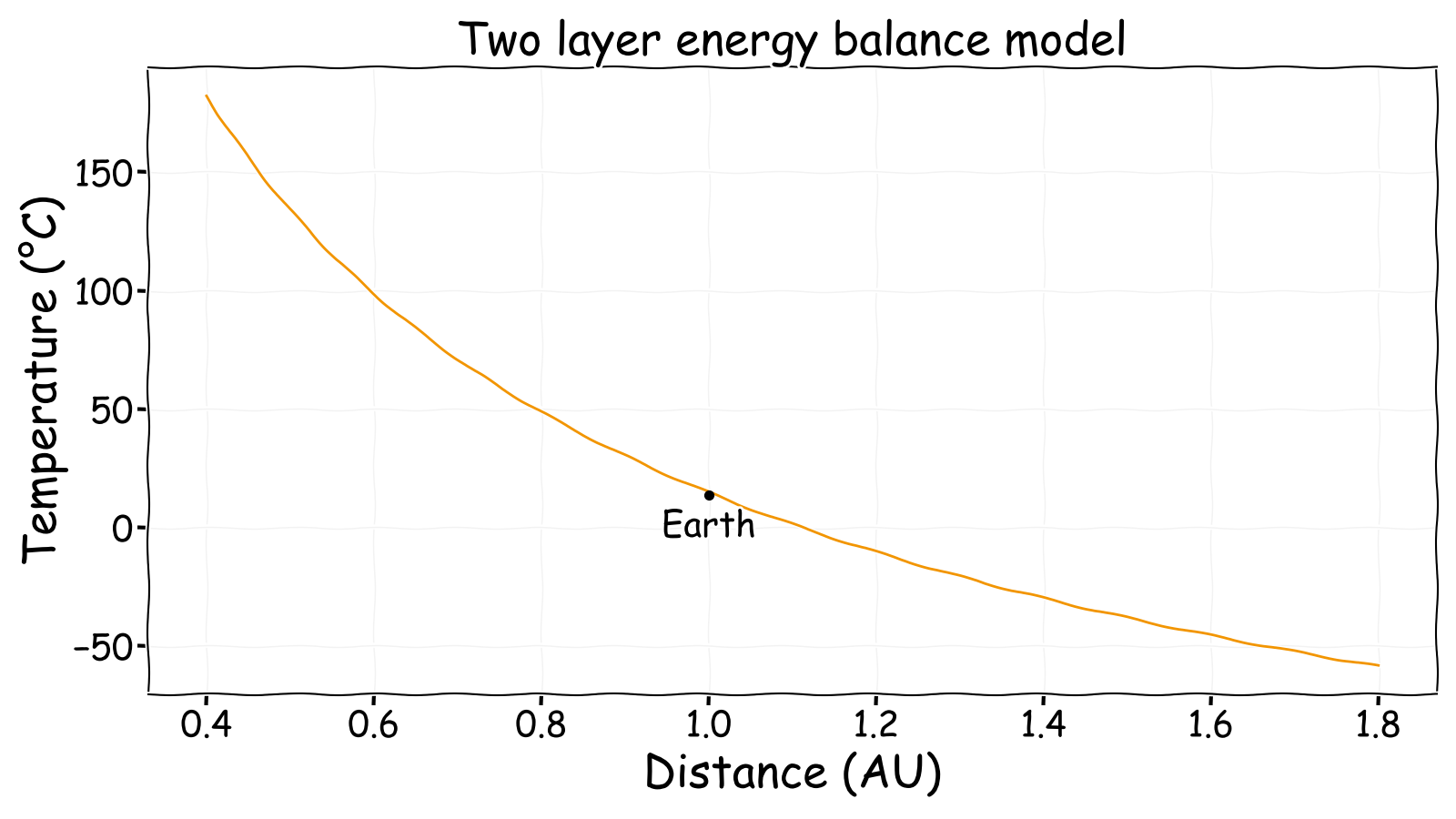 Since this looks exactly the same, this may not seem to be much more useful than the previous model. However, at least now increasing the emissivity causes the temperature to increase. This corresponds with the expected outcome whereby increasing greenhouse gas concentrations result in higher surface temperatures.

The final step in answering the original question is to determine how the emissivity varies with different atmospheric compositions. For simplicity only CO2 will be considered. Anything more than that becomes rather more complicated to analyse and probably isn't necessary for most world building anyway.

There appears to be limited information on how emissivity varies with CO2 concentration, however, conveniently a paper entitled Radiation Transfer Calculations and Assessment of Global Warming by CO2 contains some values. These values can be plotted and a logarithmic curve can be fit to the values to allow the emissivity to be calculated at arbitrary values. Note that the previous emissivity value of 0.78 had been selected to match the measured Earth temperature and may not be the "true" value. 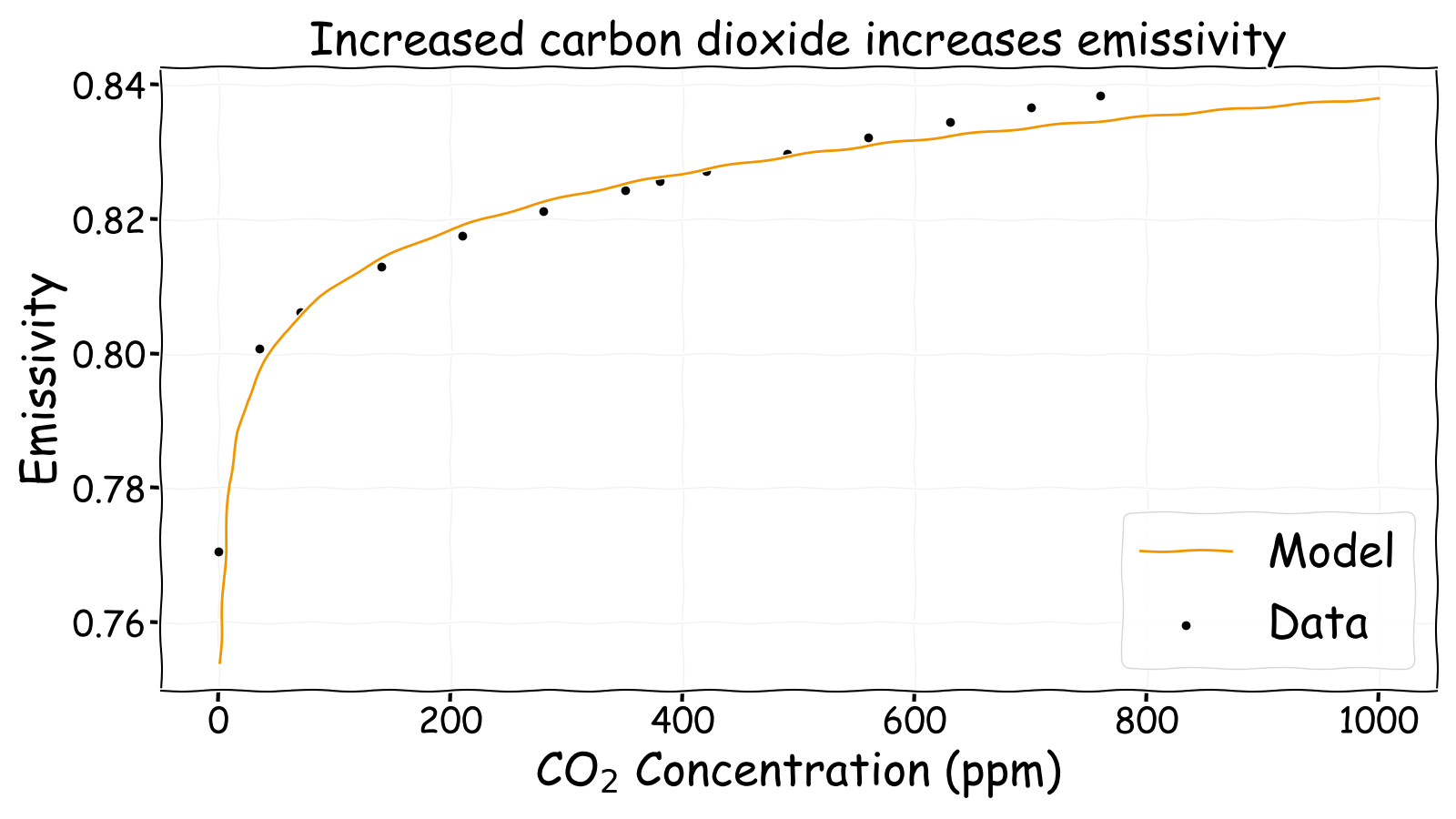 The logarithmic fit  has two parameters and takes the following form

\(\epsilon\) is the modelled emissivity, \(k\) is the scaling constant, \(C\) is the atmospheric CO2 concentration in ppm and \(\epsilon_0\) is the emissivity with no carbon dioxide present. Fitting this to the data produces the following parameters:

This is clearly not a perfect fit and it is an underestimate at higher concentrations but this is just an estimate not rigorous science after all. It is important to note that after all of this work it turns out that the emissivity only varies slightly with increasing CO2 anyway.

The final outcome is that it is possible to estimate the distance a planet should be from a star for a desired surface temperature and carbon dioxide concentration. This is obviously not a rigorous and accurate model but it seems more than sufficient for a world building exercise to ensure some level of scientific plausibility. It does seem approximately similar to some climate change predictions though the temperature change shown below does seem small unless large quantities of CO2 are present. 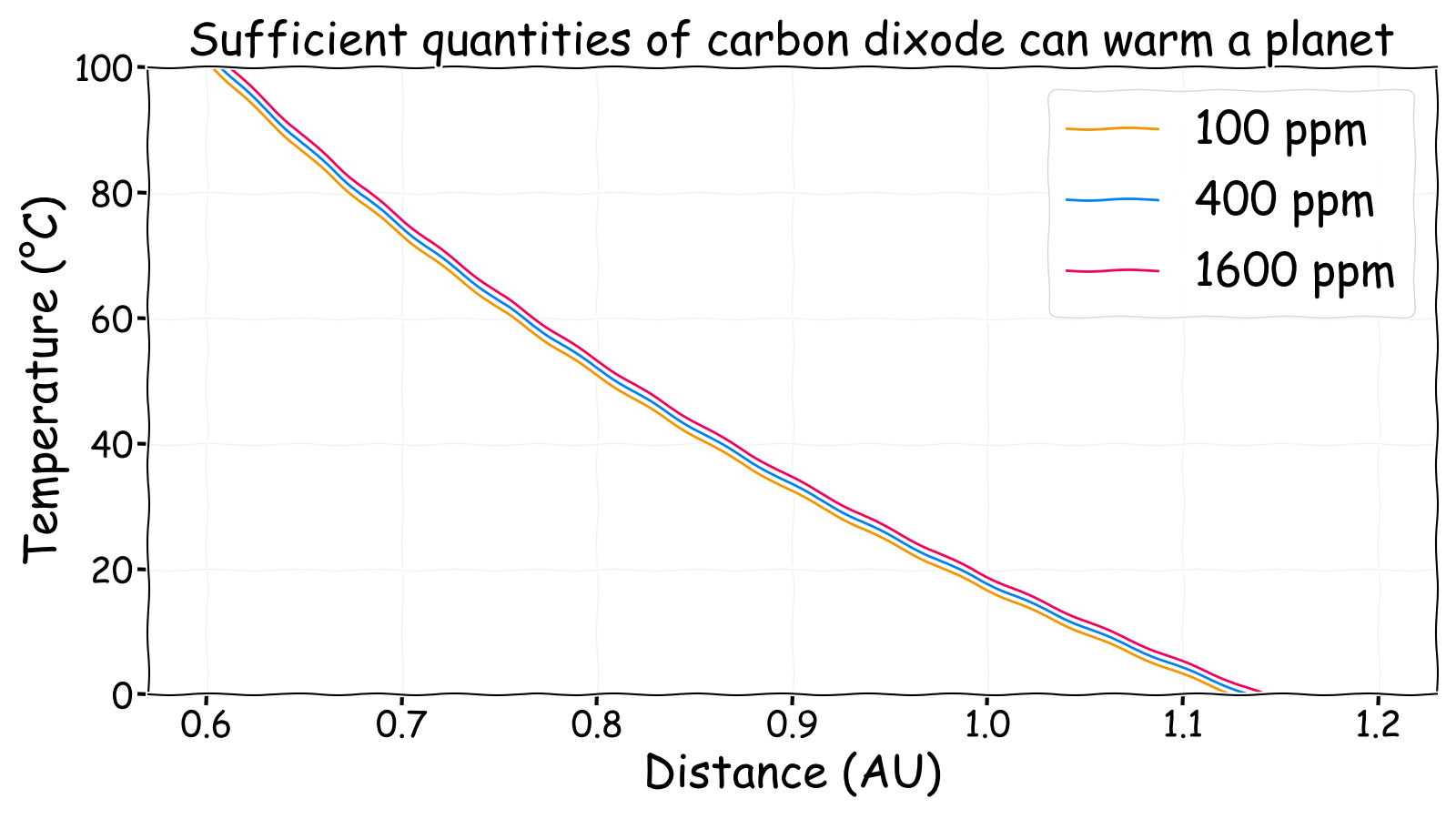 In summary, the aim was to calculate how far a planet should be from its sun in order to have a specified average surface temperature. Using a "simple" model the following steps allow this to be achieved:

It is important to remember that is still a "toy model" that is higher simplified relative to the climate on a real planet. I'm certainly not claiming that it is accurate or that it can be used for real science. However, it may still be useful for designing a planet where things at least seem somewhat realistic.

There are of course many further extensions that could be made and it's not entirely impossible that I might revisit these at some point if there is a need.

Finally, I should apologise for the delay in writing this fairly length post. Covid-19, Christmas and Childcare have all combined to significantly reduce my free time since December. This has consequently reduced my blog writing productivity.

EDIT: Since writing this article I came across an alternative approach and wrote a quick post about this alternative carbon dioxide calculation. This alternative method is simply for many cases but isn't as flexible.