Recently Netflix released a documentary entitled Alien Worlds that covers the topic of exoplanets and speculative evolution. Each of the four episodes presents a different planet and I have already covered the first planet (Atlas) and the second planet (Janus). This post covers the planet Eden from the third episode.

The third planet presented orbits a binary star consisting of a class K star slightly cooler (4,100 K) than the Sun (5,778 K) and a class M star that is significantly cooler (2,900 K) than the Sun. I don't believe it was explicitly mentioned but since the stars are shown extremely close together in the sky and only a single orbit distance is mentioned, then I will assume Eden is in a circumbinary orbit. This means that the two stars orbit each other and Janus orbits around both of them. This is similar to Kepler-16 which also consists of a class K and class M star with a planet orbiting them both. 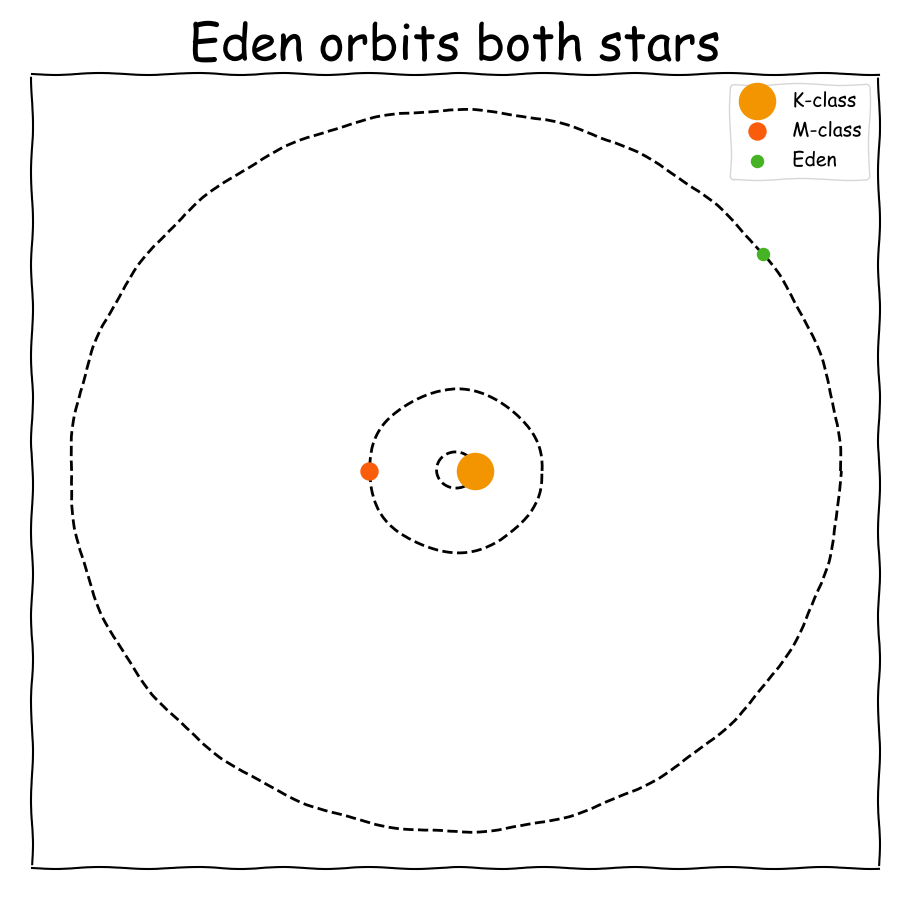 The following parameters are displayed for Eden, however, upon closer examination they seem to be completely inconsistent.

The first thing to note is that the K-class star is approximately a class K5V and the M-class star is approximate a class M5V. While this still leaves some variation the approximate luminosities are 9.0% and 0.3% of Earth's sun. This illustrates that the M-class star has very little effect on the light reaching Eden. However, because the luminosity is so low Eden would have to orbit at about 0.3 AU to receive as much illumination as the Earth. Unfortunately, it is claimed that Eden actually orbits at twice this distance which suggests it would receive a quarter of the illumination of Earth. This is completely at odds with the claim that the energy flux is actually 10% higher than Earth receives.

If we assume that the higher energy flux value is correct then it is possible to estimate the spectrum of light incident upon Eden. This can be achieved by assuming stars are blackbodies as discussed in the What Colour Are Stars? post. A few assumptions are required to determine this but the result below seems plausible. This shows that the M-class star is mostly irrelevant and that the K-class star produces more illumination at longer wavelengths than the Earth receives from our Sun. This is a somewhat expected situation on a planet orbiting non-twin stars. 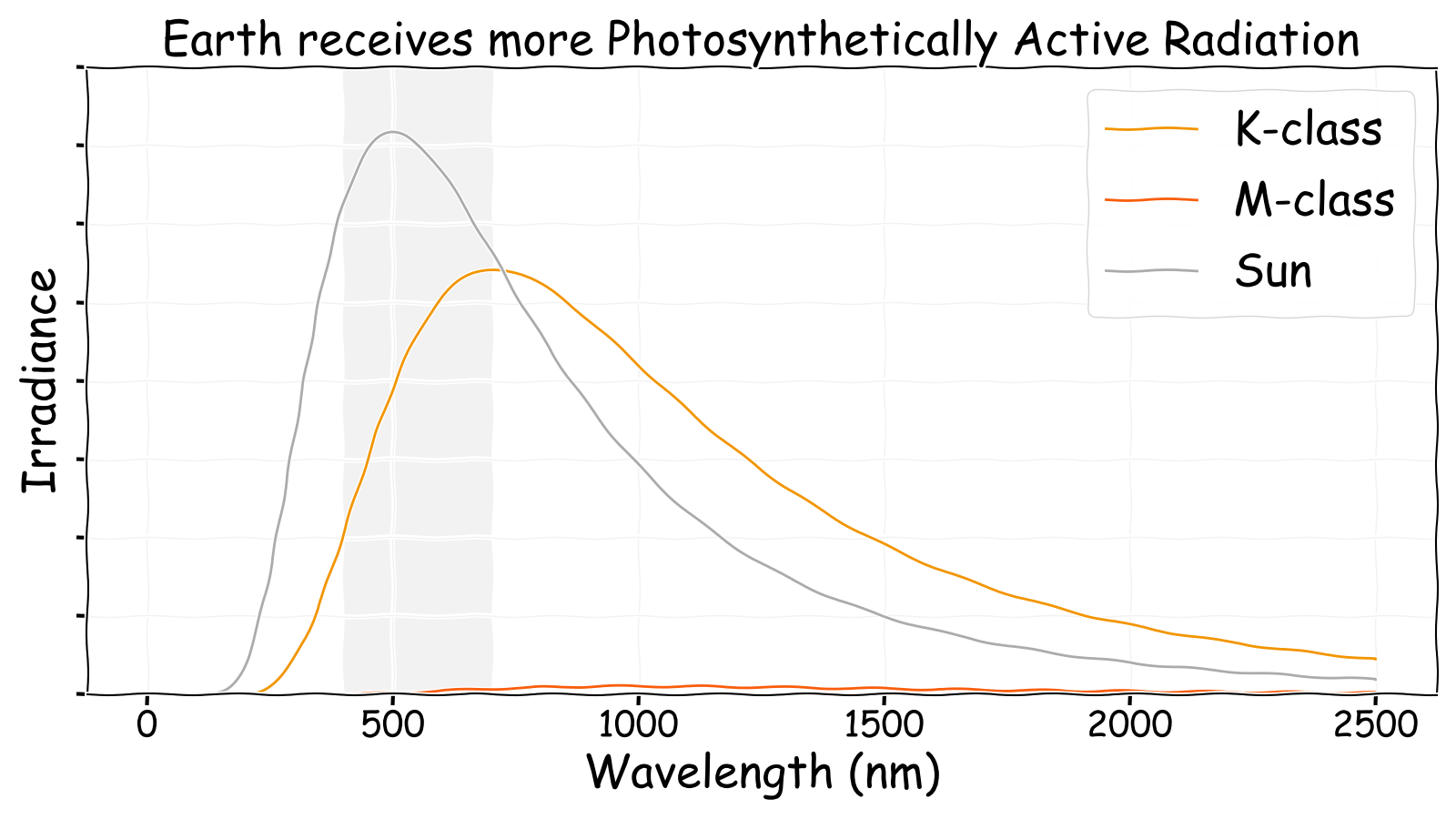 In contrast, the Sun produces more illumination within the Photosynthetically Active Radiation (PAR) region between 400 and 700 nm (marked in grey). This region defines the light used by photosynthetic organisms on Earth. The fact that Earth receives more PAR illumination than Eden suggests that either Earth is slightly better suited for phototrophs or that phototrophs on Eden must use an alternative photosynthetic pathway that takes advantage of longer wavelength light. While it is stated that Eden is lush hence the higher oxygen content, this fact is not discussed at all unfortunately.

Finally, it is worth pointing out that the apparent assumption that a planet orbiting a binary star will receive more light and therefore be more suited for phototrophs is inaccurate. Just because a planet orbits two stars does not mean it will receive any more light. That can be achieved by simply orbiting closer to a single star. A binary star simply changes the distribution of illumination in space and time along with changing the spectrum as shown above.

Leaving aside the confusion over the planetary parameters, the first organism presented was a forest dwelling grazer that looked like an ungainly rabbit with moth antenna ears. It looked rather more like an Earth animal than life on Atlas or Janus. There were however two interesting features about these grazers.

Firstly, they reproduce by producing worm like "larva" that pair up and merge to create a new adult. This wasn't described in depth but it seems similar to the alternation of generations life cycle that Earth plants use. The larva are presumably produced asexually and could be haploid (if genetics works similarly on Eden as on Earth) "gametophytes". When they pair up they could produce a diploid zygote that grows into a "sporophyte". 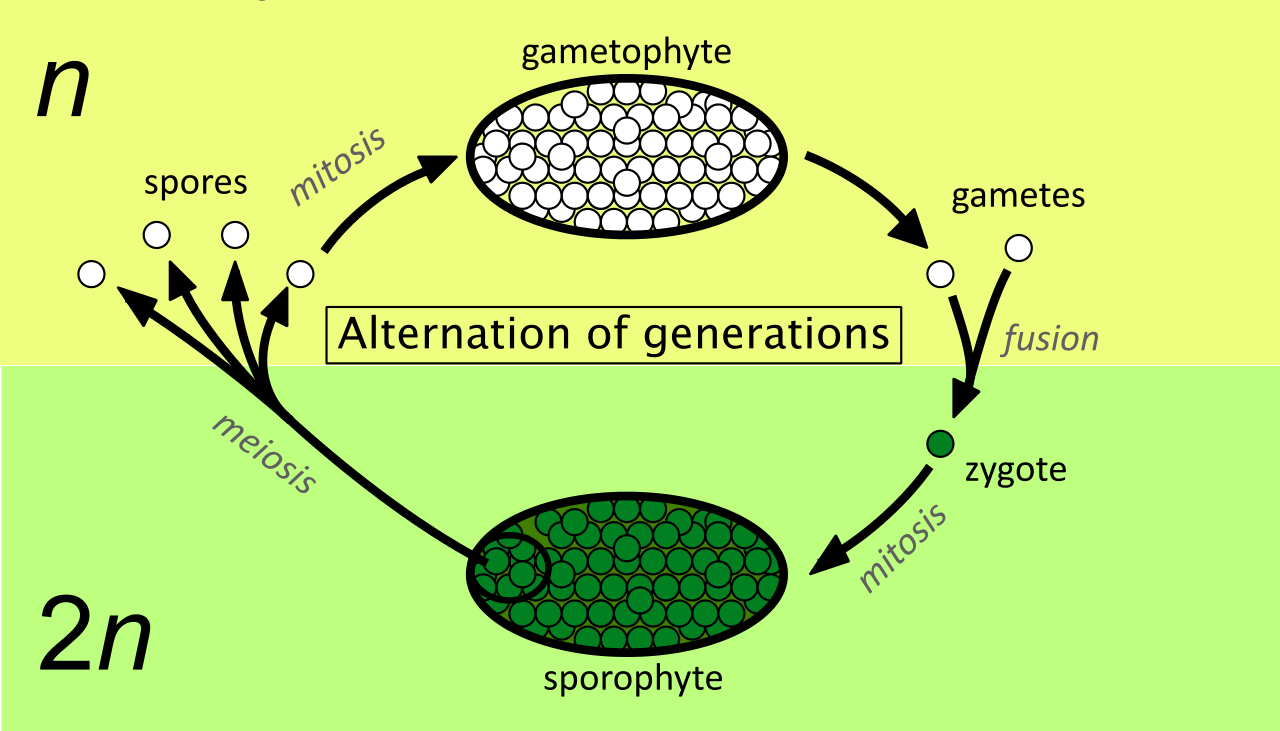 When the worm larvae merge they form a cocoon that, slightly implausibly, shoots out tendrils that attach to tree branches and contract to lift the cocoon into the air. This is described as a mechanism to protect the cocoon but since it leaves it exposed in full view and the grazers' predators are arboreal, this doesn't seem to work. Surely just hiding underground would have been better?

Secondly, due to the increased obliquity Eden has more extreme seasons than Earth. For this reason, it is said that the grazers only live for a year and die when winter comes. Since the year is listed as 206 days, this may mean that the grazers only live for around 150 days. The cocoon then matures over the winter before hatching when spring arrives. In order to survive the cold it seems that a buried cocoon would be better but I guess that's not quite so novel and alien.

The second organism to be presented is an arboreal predator that resembles a tarsier. Like the grazer it also looked a little ungainly as if it really wanted to be walking on two legs not four. There was otherwise nothing particularly noteworthy about the predator except it's "trick" for capturing fleeing grazers. It had an additional pair of arms that could stretch like a chameleon's tongue (or more accurately like Dhalsim from Street Fighter).

This seemed a bit gimmicky as it is hard to imagine how an extra pair of limbs would evolve therefore it would be more likely that the predator had hexpod ancestors. Since the grazer did not have six limbs this means that they would likely be only distantly related. It would have been much more plausible if both animals had six limbs. This was one of the problems with Avatar, where the wildlife had six limbs but the Na'vi only had four.

The final organism discussed was a form of fungus that spread through the forest just like on Earth. When comparing this with Earth the amusingly named Wood Wide Web was mentioned. This is the mycorrhizal network of underground fungal hyphae that links plants together and transfers chemicals as necessary. Unfortunately, this concept was not expanded upon for the fungus on Eden.

The Eden fungus was shown to spread by infecting the grazers with spores. Once infected the fungus influenced the grazer's behaviour such that it became fearless and did not flee the predators. When the predator eats the grazer it too becomes infected. The predator then shortly dies and its corpse provides the fungus with a handy nutrient source from which to start growing. This is a nice parallel to similar parasites on Earth such as Myrmeconema neotropicum or Ophiocordyceps unilateralis.

It wasn't explicitly stated why the fungus doesn't just kill the grazer and use its corpse though. The second stage doesn't seem to add any benefit unlike Earth parasites which might change to a flying host for better distribution. A possible reason is that unlike the grazers, the predators are said to migrate to avoid winter. This would allow the fungus to spread to other locations and populations. This wasn't really suggested in the episode but it would make sense.

Leaving aside the confusion over the planet parameters, it's a little disappointing that they made Eden orbit a binary star but that fact was actually entirely irrelevant. It's also a shame that emphasis was placed on the increased illumination but rather than showcase a plant a fungus was used instead. The organisms shown were not especially interesting and it felt rather similar to an Earth ecosystem rather than an alien one.

The fourth episode turns out to not be about speculative evolution but is instead about a hyper-advanced civilisation that exists as brains in fish tanks. Their sun is expanding into a red giant and they decide to move to a planet at a greater distance from the sun. For this reason, I may review the video in the near future but it will be slightly separate from this series of three posts covering Atlas, Janus and Eden.