This morning Netflix released a documentary entitled Alien Worlds that covers the topic of exoplanets and speculative evolution. Here is a review of the first of four episodes with reviews of the other episodes to follow.

In the last two decades, astronomers have discovered thousands of planets outside our solar system; they believe there are trillions more. If life exists on only a fraction of them, then the cosmos must be teeming with alien species. But what do those aliens look like? How do they feed, reproduce and evolve? By applying the laws of life on Earth to the rest of the universe, it is possible to imagine what lives beyond - on Alien Worlds.

Each of the four episodes in season 1 presents a different planet:

Interestingly, the first three planets cover a high gravity planet, a tidally locked planet and a planet around twin binary stars. All three of these apply to my proposed world of Khthonia so perhaps there is useful inspiration here.

The first episode begins with a brief introduction to exoplanets which states that over 4,000 exoplanets have currently been discovered. It then states that it is believed there is about 1 planet per star which suggests there are over one million billion trillion exoplanets in the universe. Clearly that leaves plenty of opportunity for speculative evolution.

The episode then presents the exoplanet Atlas which will be explored in this episode. It has the following parameters:

As stated in the episode summary, on Atlas "dense gravity creates a thick atmosphere". This is reflected in the atmospheric density that is 5.3 times greater than on Earth but it appears that the gravitational acceleration has been calculated incorrectly:

\(G\)  is the gravitational constant, \(M\)  is the mass of the planet and \(R\) is the radius of the planet. Since the mass of Atlas is 203% of Earth's mass then if it was the same size as Earth you would expect the surface gravity to be 203% of Earth's. However, since it has a diameter 132% of Earth's then the surface gravity would be less than 203%. The end result is that Atlas would only have a surface gravity of 1.16 g rather than 2.09 g. It's slightly surprising that such a basic error was made but it doesn't really change anything. I'll assume that the gravity is actually 2.09 g throughout the rest of this post.

The format of the episode is that a few specific creatures are introduced along with some aspects of their physiology and behaviour. This is then compared with examples from Earth to justify why it is realistic. This is all fairly reasonable, though despite being 41 minutes long this means that only four organisms are described and not necessarily in any great depth.

Since the atmosphere is thick it is proposed that it would be easier for seeds to float in the sky as if they were underwater. This is proposed to produce large green floating clouds above the land bound forest. The subject of lighter than air organisms is one that I am familiar with as my article about this on the Planet Furaha web site was what prompted me to start this blog.

A lighter than air organism can be simplified to a balloon that produces lift and the rest of the organism that is equal in weight to that lift. The balloon then consists of a thin membrane of a certain volume containing a lifting gas that is lighter than the surrounding air. The amount of lift that this can produce is equal to the volume of the balloon multiplied by the difference in density between the air and the lifting gas, minus the weight of the membrane.

Using a membrane that is equivalent to a metallic helium party balloon with a mass of 26 g per square metre filled with hydrogen suggests that small lighter than air organisms are not possible on Earth. This is because the membrane is heavier than the lift generated unless the balloon volume is sufficiently large. However, since Atlas has an atmosphere 5.3 times thicker than Earth a smaller balloon is capable of lifting the membrane. 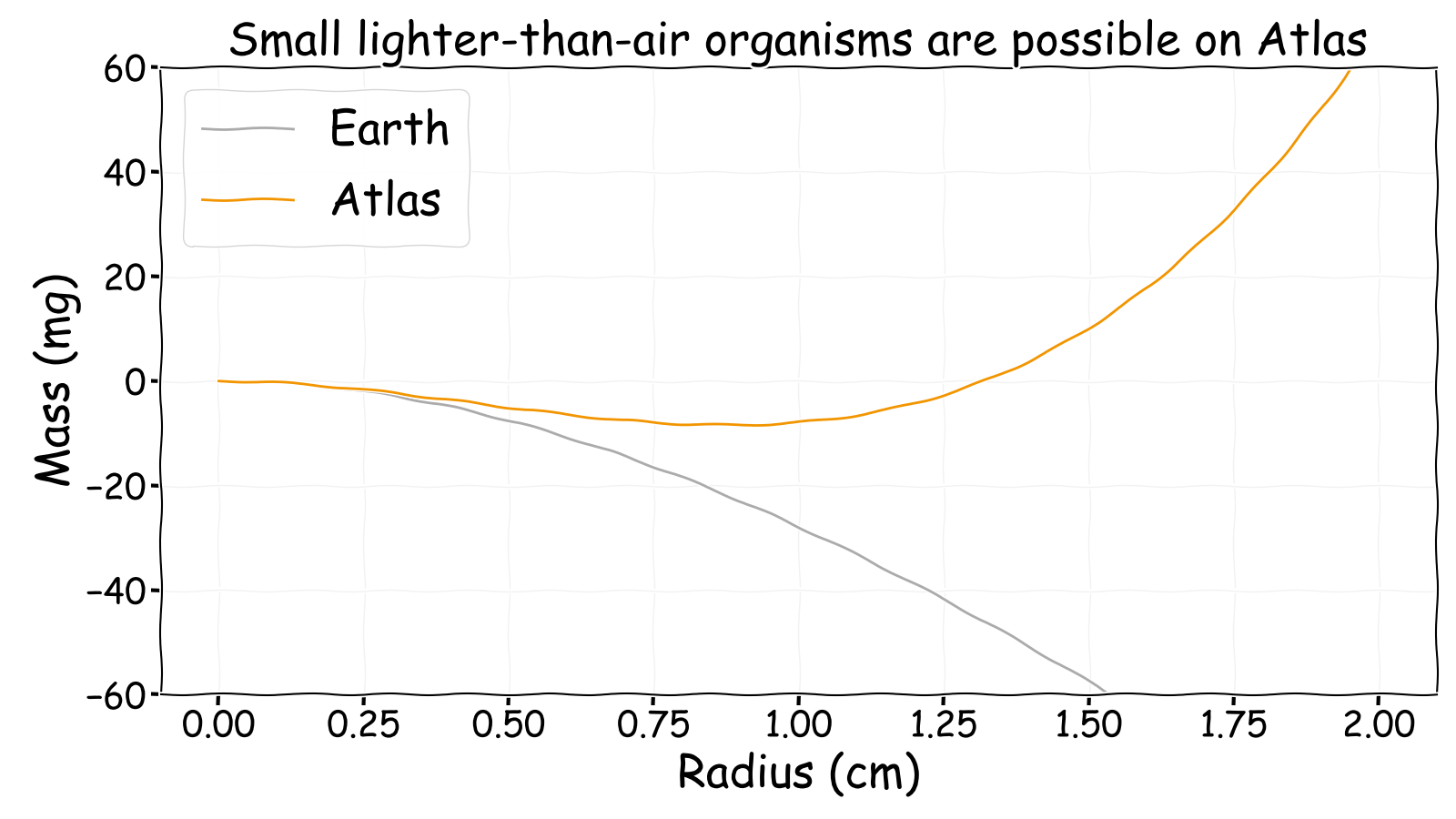 It is not clear how large the airborne seeds are supposed to be but physics suggests that they need to have a radius of at least 1.4 cm to be neutrally buoyant and float. Technically, if it was slightly less than neutrally buoyant it could still float in updrafts and thermals but this size range seems plausible. However, at this size the membrane has a mass of around 19 mg whereas the seed it carries may only be 1 mg. This seems a slightly implausible ratio as the plant would probably do better to just produce twenty times as many seeds and rely on the wind to distribute them.

This problem of the membrane mass hampering small lighter than air organisms is why I proposed either using temporary "soap" bubbles or a graphene foam as possible alternatives.

It is then proposed that six-winged airborne herbivores feast on these seeds. The front and back pairs of wings are small and described as being for thrust and direction. In contrast, the middle pair of wings are longer and fixed like aircraft wings. These are described as providing lift which would follow the lift equation:

\(L\) is the lift, \(C_l\) is the lift coefficient that is dependent on the shape of the wings, \(\rho\) is the air density, \(v\) is the velocity and \(A\) is the wing area. Since Atlas's atmosphere is about five times thicker than than Earth this suggests the wings will generate about 5 times more lift than they would on Earth. However, this is balanced by the fact that gravity is stronger on Atlas, though since gravity isn't five times stronger this still implies that flying is easier on Atlas than on Earth. An animal could have smaller wings or be larger than it could on Earth, though it is unknown how large the grazers are supposed to be.

These grazers apparently remain aloft from shortly after hatching when they throw themselves off a cliff like the proverbial lemmings until a female lands at the end of her life to lay her eggs. This is similar to, but more extreme, than the common swift that can spend up to 10 months almost continuously in the air.

The third organism presented was another lighter than air animal that preyed on the aerial grazers. This organism had an interesting design as it filled itself with hydrogen on the ground so that it could float high in the air above the grazers. At that point it would vent its hydrogen and plummet towards a selected grazer target. It would use its small wings to steer towards its target and attempt to make contact. If successful, multiple predators were required to bring their prey down to the ground, though no specific reason for this was mentioned.

This was described as being akin to a falcon stooping on its prey, however, it was not clear how large these predators were. Peregrine falcons are around 1 kg in mass and reach their terminal velocity of 300 km/h when diving. Is this comparable to the Atlas predators? 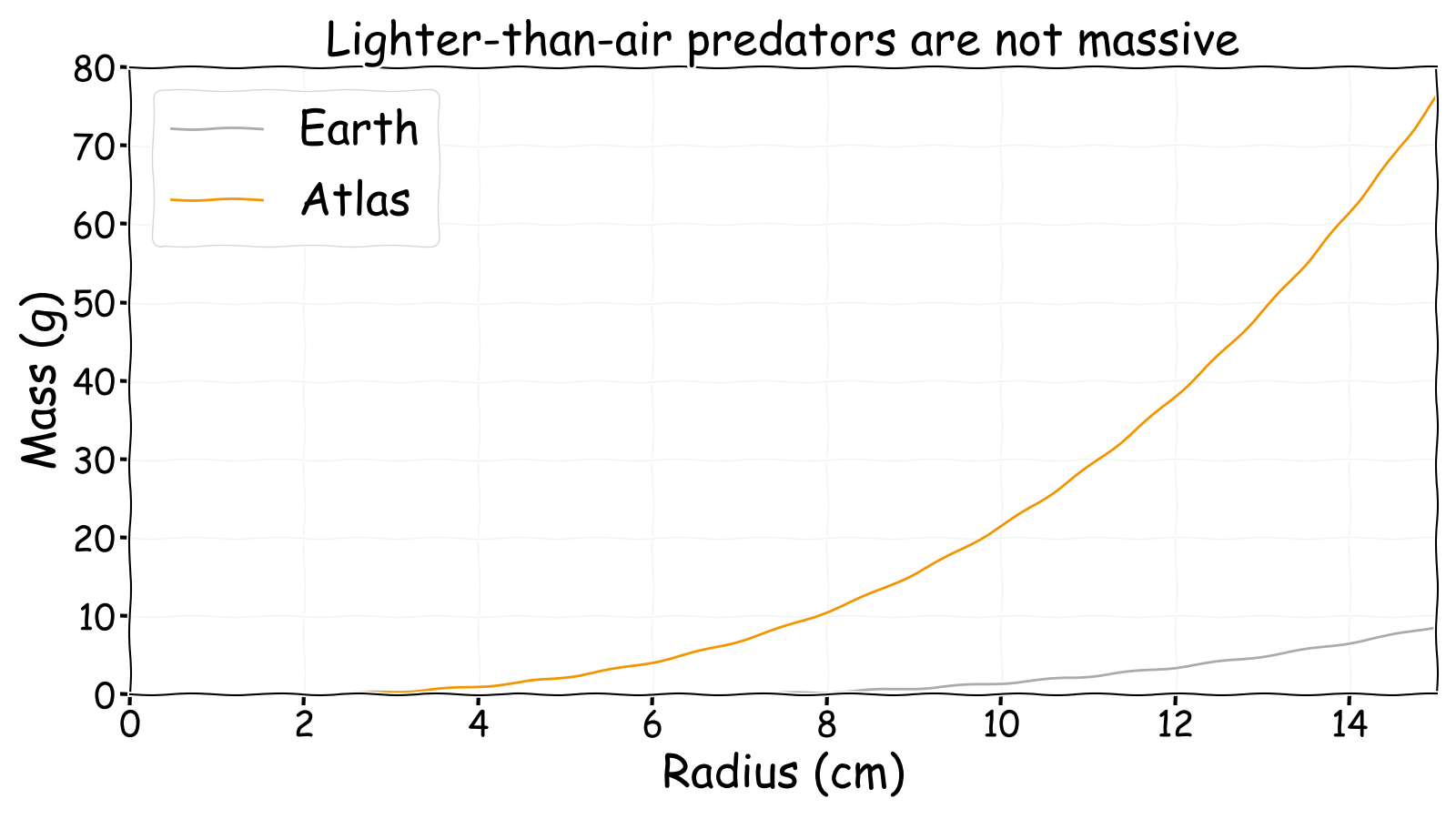 This suggests that even a predator that begins as a 30 cm diameter balloon is still only about as massive as a Norwegian lemming at 70 g. While the image of predatory lemmings raining from the sky is amusing, it does not seem quite as effective as a falcon with over ten times the mass swooping from above.

However, since gravity is stronger on Atlas, perhaps the speed of descent will make up for the loss of mass? Assuming the animal basically falls from a great height then the highest speed it could reach is its terminal velocity.

This all combines to produce a terminal velocity of about a sixth of the peregrine falcon. Admittedly, a lemming falling from the sky at 50 km/h is still quite impressive but it has only about 0.2% of the kinetic energy of the swooping falcon. It's no wonder that multiple predators are required to bring down a grazer.

The final organism mentioned is certainly the least plausible as it is a large boneless creature with no skeleton that eats the hatchling grazers as they make their way to the cliff. It is effectively a giant amoeba. Again it is impossible to estimate the size of this predator but it is many times larger than the hatchlings and clearly quite tall. On Earth there are no comparable terrestrial animals that have any appreciable height as the absence of a skeleton makes this challenging. On a planet with stronger gravity than Earth this seems very implausible.

The visual appearance of this episode was certainly good and it was also interesting how comparisons were made with Earth life to justify the design choices in the organisms presented. However, while the general idea that flight is easier on a planet with a thicker atmosphere is true this still does not make small lighter-than-air organisms guaranteed. It's unfortunate that the three airborne organisms presented were not complemented with a plausible terrestrial organism as the boneless predator seemed a bit unlikely.

It is interesting that several of the ideas presented in this show (i.e. airborne seeds, thick atmosphere enabling larger animals to fly and predatory lighter than air organisms) are ones that I have considered for Khthonia. I now just have to learn to draw sufficiently well that I can produce similarly good images...