Can Dead Stars Have Habitable Planets?

Since it is Halloween I thought I would write a quick article based on a paper about the habitability of planets around "dead stars". Specifically, can pulsar planets ever be habitable or are they only suitable for the living dead?

What is a pulsar?

Firstly, what actually is a pulsar? Pulsars are typically neutron stars that are formed when massive stars (more than about 8 times the mass of the Sun) reach the end of their lifetime as a main sequence star. As the star has depleted its fuel supply there is no longer any thermal pressure resisting gravity so the star collapses under its own weight. This causes a supernova explosion and the resulting remnant of the star's core can form a neutron star. A neutron star has a mass around 1 to 2 times the Sun's mass and if it was much higher a black hole would be formed instead. Despite having such a large mass a neutron star is extremely dense and only has a radius of around 10 km!

Due to conservation of angular momentum, an ice skater will rotate faster if they pull in their arms while spinning. In a similar manner, the massive decrease in radius of a neutron star causes it to spin extremely quickly.  Since neutron stars also have extremely strong magnetic fields they can produce jets of charged particles from either pole. The combination of this is that a neutron star can act like a lighthouse with a spinning beam of illumination. This beam can be detected as a regular series of pulses and hence they are known as pulsars.

An example pulsar of particular interest is PSR B1257+12 which was detected in 1990. It has also been given the rather more pronounceable name Lich, after the old English word for corpse and the fictional undead mage. Lich is located over two thousand light years away in the constellation of Virgo, however, despite this distance, it was still possible to detect its pulses repeating every 6.2 milliseconds.

Lich is estimated to have the following properties:

It is interesting to note that close inspection of the rotation period allowed the first exoplanets to be discovered around Lich in 1992. In total three planets have been detected with the following properties:

Can pulsar planets be habitable?

The paper that discusses whether pulsar planets can be habitable (Neutron Star Planets: Atmospheric processes and habitability) is rather technical on the details of the physics involved but here is the abstract for reference:

Of the roughly 3000 neutron stars known, only a handful have sub-stellar companions. The most famous of these are the low-mass planets around the millisecond pulsar B1257+12. New evidence indicates that observational biases could still hide a wide variety of planetary systems around most neutron stars. We consider the environment and physical processes relevant to neutron star planets, in particular the effect of X-ray irradiation and the relativistic pulsar wind on the planetary atmosphere. We discuss the survival time of planet atmospheres and the planetary surface conditions around different classes of neutron stars, and define a neutron star habitable zone based on the presence of liquid water and retention of an atmosphere. Depending on as-yet poorly constrained aspects of the pulsar wind, both Super-Earths around B1257+12 could lie within its habitable zone.

Simply, the paper discusses two methods by which a neutron star could irradiate its orbiting planets: 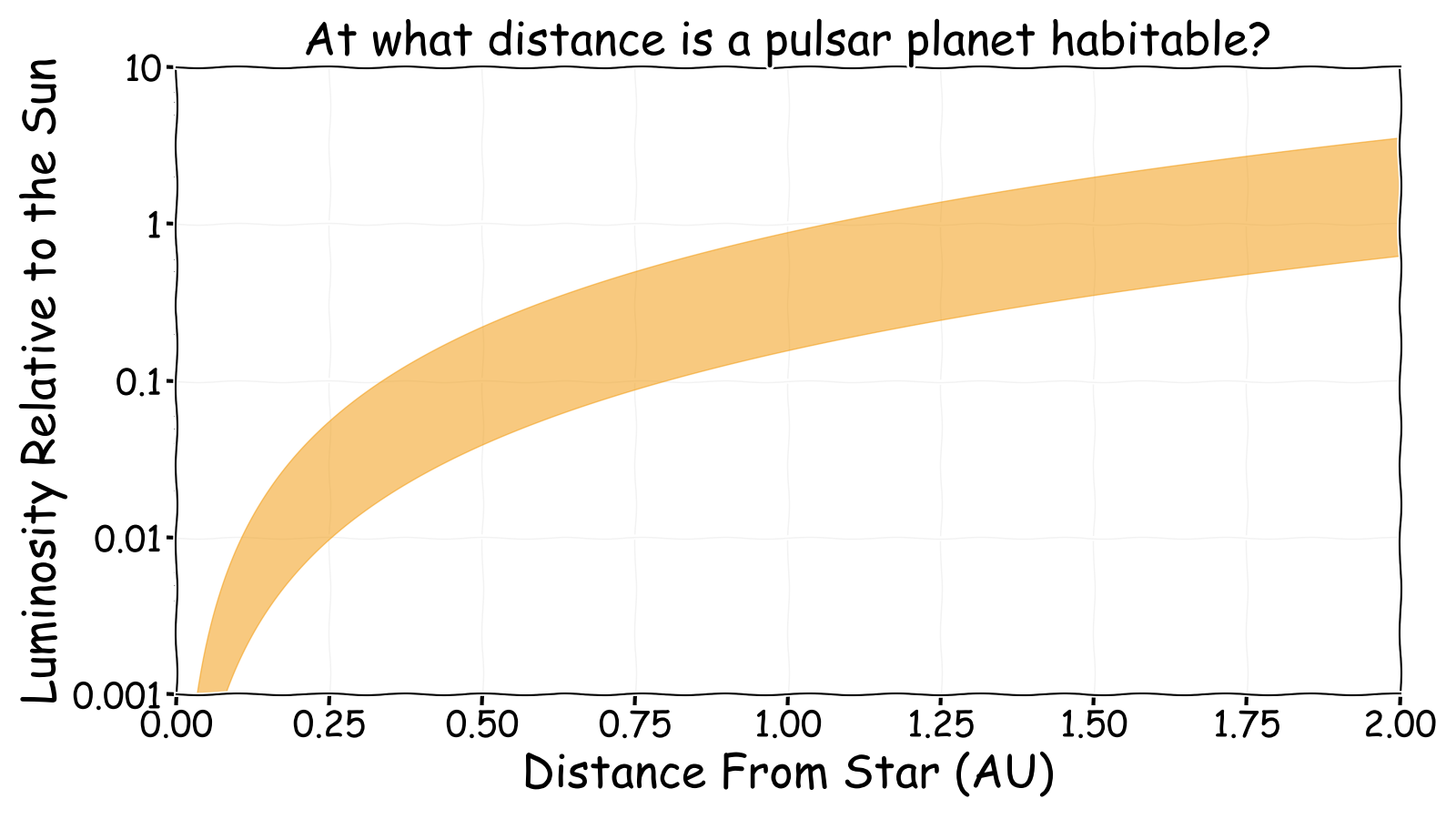 Just as with light from main sequence stars, if a planet is too close to the neutron star then these sources of irradiation will boil the planet dry, whereas if it is further away then the lack of heating will cause it to be a frozen rock. The chart below shows the necessary luminosity for a planet to be habitable at a specific distance. Unfortunately, uncertainty in the actual luminosity of Lich means that any luminosity on this scale might be correct. The planets could therefore be cold enough to liquify nitrogen or hot enough to melt lead, or perhaps they will be somewhere in the middle and be deemed habitable.

Unfortunately, there is a second problem for determining habitability on a pulsar planet. The high energy solar wind will slowly cause the atmosphere to evaporate. However, given the intensity of a pulsar's wind slowly is actually quite fast on an astronomical timescale. Earth like planets typically have an atmosphere no more than 1% of the total mass. Such atmospheres could be evaporated in a few million years or less. Clearly that is insufficient for life to evolve even if it is habitable for that entire period.

However, if the planet were more massive than Earth (i.e. a super-Earth) and have vastly more atmosphere (i.e. 30% of the total mass) then it would be possible to maintain an atmosphere for much longer, such as several billion (or even trillion) years. Such a planet would resemble a mini-Neptune with a high mass and a thick atmosphere.

While perhaps life could evolve on such a world it would not be similar to life on a terrestrial planet such as Earth. Perhaps an aerial ecosystem relying on floating organisms buoyed by updrafts could evolve. The absence of a typical sun would prevent Earth-like photosynthesis from developing, though perhaps radiotrophic plants harvesting gamma rays along with chemosynthetic autotrophs would provide the primary producers. At some future date I may consider this more thoroughly for the planet, currently tentatively named Yomi.

To complete this article, there is one final point to consider that is well aligned to the Halloween theme. How do planets form around pulsars. It is known that pulsar planets are rare and this is basically due to the evolution of the star which becomes the pulsar. There are effectively, three generations of planets possible around a pulsar:

So not only has the star come back from the dead, the planets themselves may have also been reanimated from the corpses of their previous lives. This is suitably evocative as a Halloween atmosphere that even if habitability is tenuous this surely is fertile ground for a world building project with some level of scientific background.