Before I go any further I will briefly describe my world building / speculative evolution project. As mentioned previously this is a work in progress but some areas are more fully defined than others. I reserve the right to change my mind as I post more information though!

Since my career in physics is in optics I was interested in considering a world where the interplay of different wavelengths of light had a large influence on evolution. Ideally this would mean considering not just the visible light that we are used to on Earth but also the ultraviolet and infrared on either side.

For this reason I choose a system consisting of two similar red dwarfs. Red dwarfs are cooler than our Sun and so a greater proportion of their light is red or infrared. However, they are also more likely to be flare stars that regularly produce ultraviolet solar flares. Interestingly, as around 70% of all stars are red dwarfs and about half of all stars are in binaries this is not actually an unusual system.

The two stars are quite close and orbit each other every few days. This causes a set of planets to form around them both in circumbinary orbits. These planets range in size but one of the closest is a mini-Neptune. It has a rocky core slightly more massive than Earth and began life with a thick hydrogen atmosphere. As it is much closer to its suns than Earth is to the Sun its orbit period is less than two Earth months. 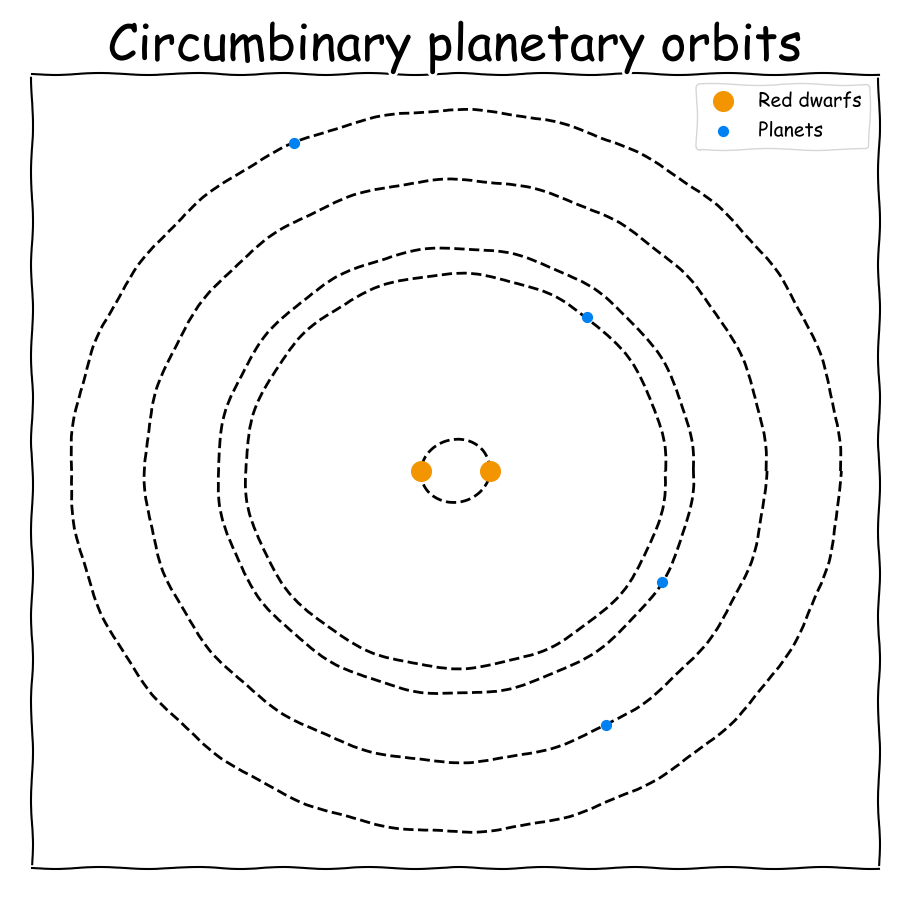 At this distance the intense flares from both stars in the first billion years of the system's life evaporates the atmosphere until something only slightly thicker than Earth's is left. What remains at this point is a habitable evaporated core (sometimes known as a chthonian planet) called Khthonia.

Due to it's proximity to the twin suns, it does not take long for Khthonia to become tidally locked. This means that one side always faces the suns and the other side always faces away. However, because Khthonia orbits two stars, despite being tidally locked the oceanic tides are much stronger than on Earth. This leads to greater erosion and a higher mineral content in the oceans. Combined with the slightly higher gravity on Khthonia the landscape is dominated by shallow seas and coastal wetlands.

With the passage of years, life on Khthonia eventually began deep in the seas feeding on chemical energy from volcanic hydrothermal vents. The water also provided protection from the harsh ultraviolet flares that would otherwise have sterilised the sun facing side of Khthonia.

However, on the sun facing side at least, the energy provided by the continual illumination was an irresistible draw for single celled life and eventually photosynthesis evolved. Unfortunately, red and infrared light does not penetrate water as efficiently as blue light. This meant that organisms taking full advantage of the illumination also exposed themselves to the risk of being killed by the regular flares.

This conflict resulted in various evolutionary pressures for photosynthetic organisms. Primarily, a greater resistance to ultraviolet exposure was produced, perhaps similar to Earth's Conan the Bacterium (Deinococcus radiodurans). This allowed access to shallower water over longer periods and increased the amount of light that could be gathered. Another adaptation enabled the detection of rising ultraviolet levels and avoid the oncoming flare by seeking shelter in deeper water. As the ability to continually gather light increased, the constraint on growth became the availability of nutrients not energy. This caused many algal species to become mixotrophs and feed on plankton to resolve the bottleneck.

The increasing complexity of algal lifeforms on Khthonia eventually produced the distant ancestor of all complex life (i.e. equivalent to eukaryotes). Multicellular life evolved from this and diverged into two dominant clades. The first mostly remained free swimming in open water and evolved sophisticated sensing and movement capabilities. The second mostly lived on (or under) the sea bed and adapted to changing environmental conditions with the varying tides, including the ability to survive above water for periods of time.

At some point, a member of the second clade formed a parasitic/symbiotic relationship with the first clade in a similar manner to lichen. This third clade retained some of the capabilities of the other two and rapidly dominated many ecological niches.

Beyond here I do have some ideas, but it is far less concrete and there is no need to go into further detail yet. Over my next articles I will aim to provide some background on the decisions that lead the project in the direction described above. Hopefully my brief description sounds somewhat interesting though. Let me know what you think in the comments.