Stars come in a variety of forms and deciding on the nature of the star (or stars) around which a habitable planet orbits is an important first step when designing an environment for world building using a bottom up approach. While a star similar to the Sun is obviously suitable for life it is interesting to consider how life might be different beneath an alien star with different properties.

There are a wide variety of different stars in the universe but astronomers discovered that if you plotted luminosity versus temperature for known stars then the majority of stars (including the Sun) were located in a continuous band. This plot is known as the Hertzsprung-Russell diagram and the continuous band is known as the "main-sequence".

These main sequence stars are also known as dwarfs to distinguish them from giant stars, though they are still very large. A world building project could investigate giant or white dwarf stars instead of main sequence dwarf stars but I will leave that for a future post.

Conveniently, the reason that main sequence stars form a continuous band is due to variation in mass. This means that the nature of a star can very approximately be determined just by stating its mass. For simplicity this is normally quoted in solar mass units, where Earth's sun has a mass of 1 M☉ (or about 1,988,470,000,000,000,000,000,000,000,000 kg). The symbol after the M is the astronomical symbol for the Sun and is used when something is compared to the Sun.

A simple description of a star is a glowing ball of gas (mostly hydrogen and helium) held together by its own gravity. Nuclear fusion in its core converts hydrogen into helium and other heavy elements while also producing large amounts of light and heat. Gravity tends to make this ball collapse whereas the thermal energy tends to make it expand. At some point these two competing effects balance. Since gravity is stronger in more massive stars, this means more massive stars must be hotter. Due to the Stefan-Boltzmann law a hotter object also radiates more power and therefore more massive stars are also more luminous.

This lead to the Harvard spectral classification system where stars are categorised into groups based on their properties. Firstly, a letter is used to define the temperature range of the star:

Within this temperature range a number from 0 to 9 is used to define the exact position with 0 being a hot star and 9 being a cool star. For example, our sun is a G2 star. The table below shows example mass, radius, temperature and luminosity values for a star in the middle of each class and the our Sun for comparison. The values are taken from a recent paper on main sequence stars and they are a bit too precise so should really only be taken as examples. They do however illustrate the massive variation between the large bright O-class stars and the smaller dim M-class stars though.

Note that our Sun has a mass of 1 M☉, a radius of 1 R☉, a temperature of 5,778 K and a luminosity of 1 L☉. This does not exactly fit with the numbers above as a G2 star is generally more massive, larger, hotter and more luminous than a G5 star. This shows that other factors such as age and composition also influence the properties of a star but that is only a minor detail.

Since more massive stars are more luminous they burn their hydrogen fuel quicker than less massive stars. This means that their lifetime as a main sequence star is much shorter. Very massive stars therefore have a lifetime that is far too short for life to evolve. It doesn't necessarily mean that planets in orbit around them are uninhabitable but life would have began elsewhere and subsequently been transported there. 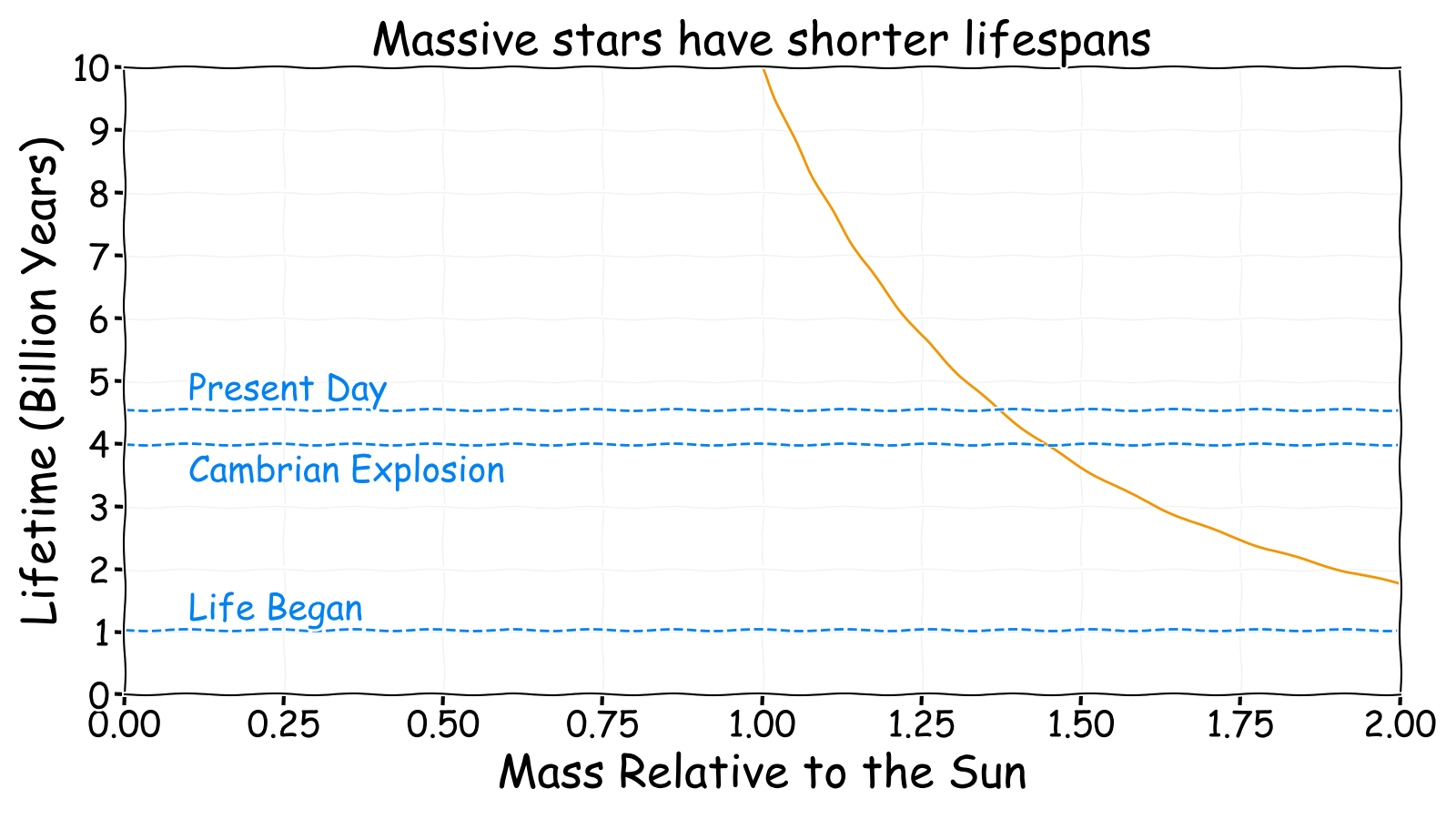 As the chart above shows, stars less massive than our Sun are predicted to have an extremely long life leaving plenty of time for life to begin and evolve into many forms. Stars more massive than our sun however have a shorter predicted lifespan than our Sun's 10 billion years. Since Earth is currently about 4.5 billion years old then stars up to 50% more massive than the Sun may still have time to produce a complex ecosystem like Earth. This ecosystem may be short lived however as the star will be nearing the end of its life and will soon (in geological terms) begin to expand into a red giant. Needless to say, this is unlikely to be a pleasant experience for life on the (previously) habitable planet.

For this reason only FGKM class stars with a mass up to around 1.5 M☉ are suitable for investigating the evolution of life from the very beginning. By comparing many real stars it is possible to determine approximate relationships between mass, temperature, radius and luminosity for these stars. These relationships can then be used to choose realistic values for stellar parameters for fictional stars. 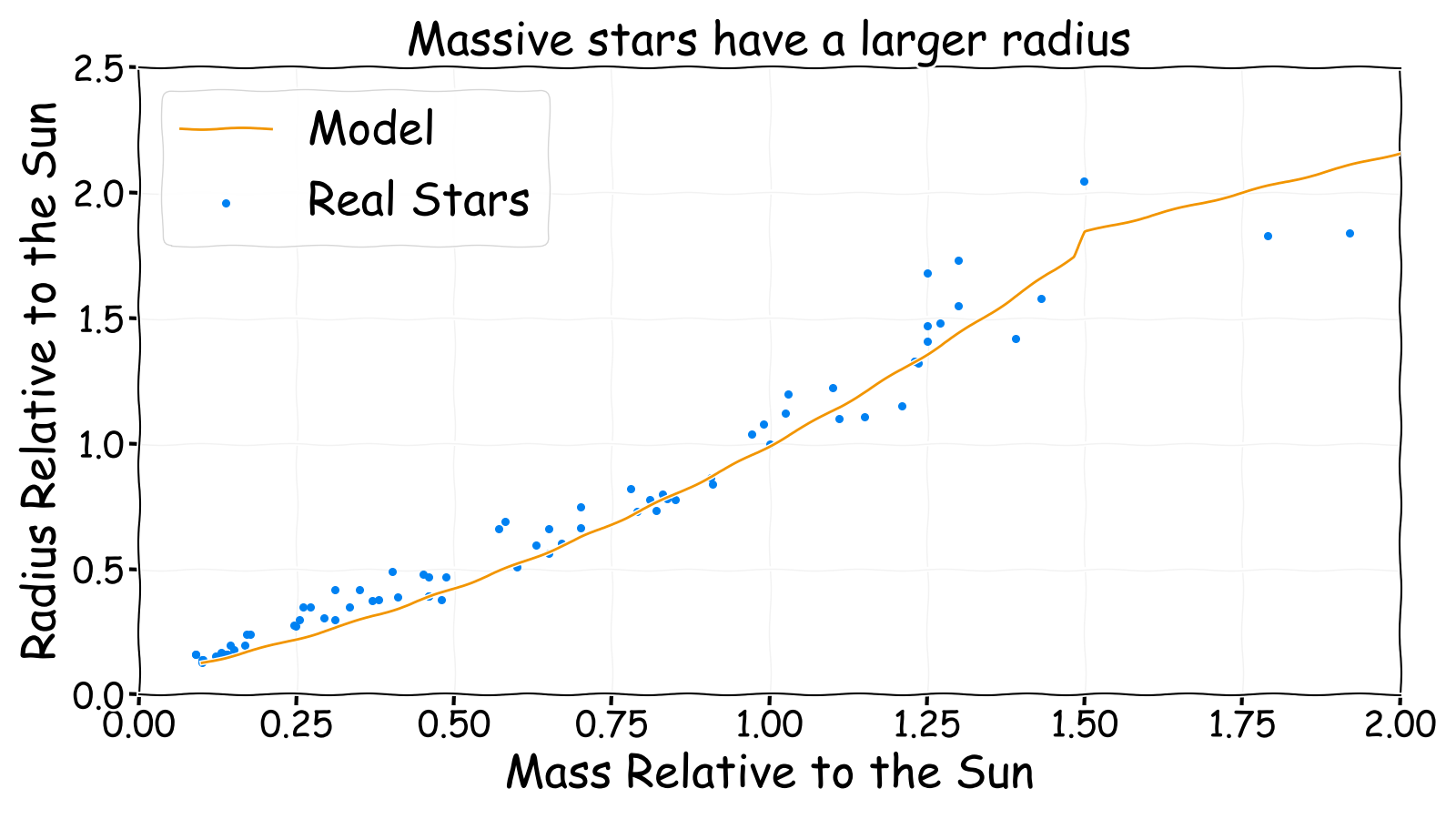 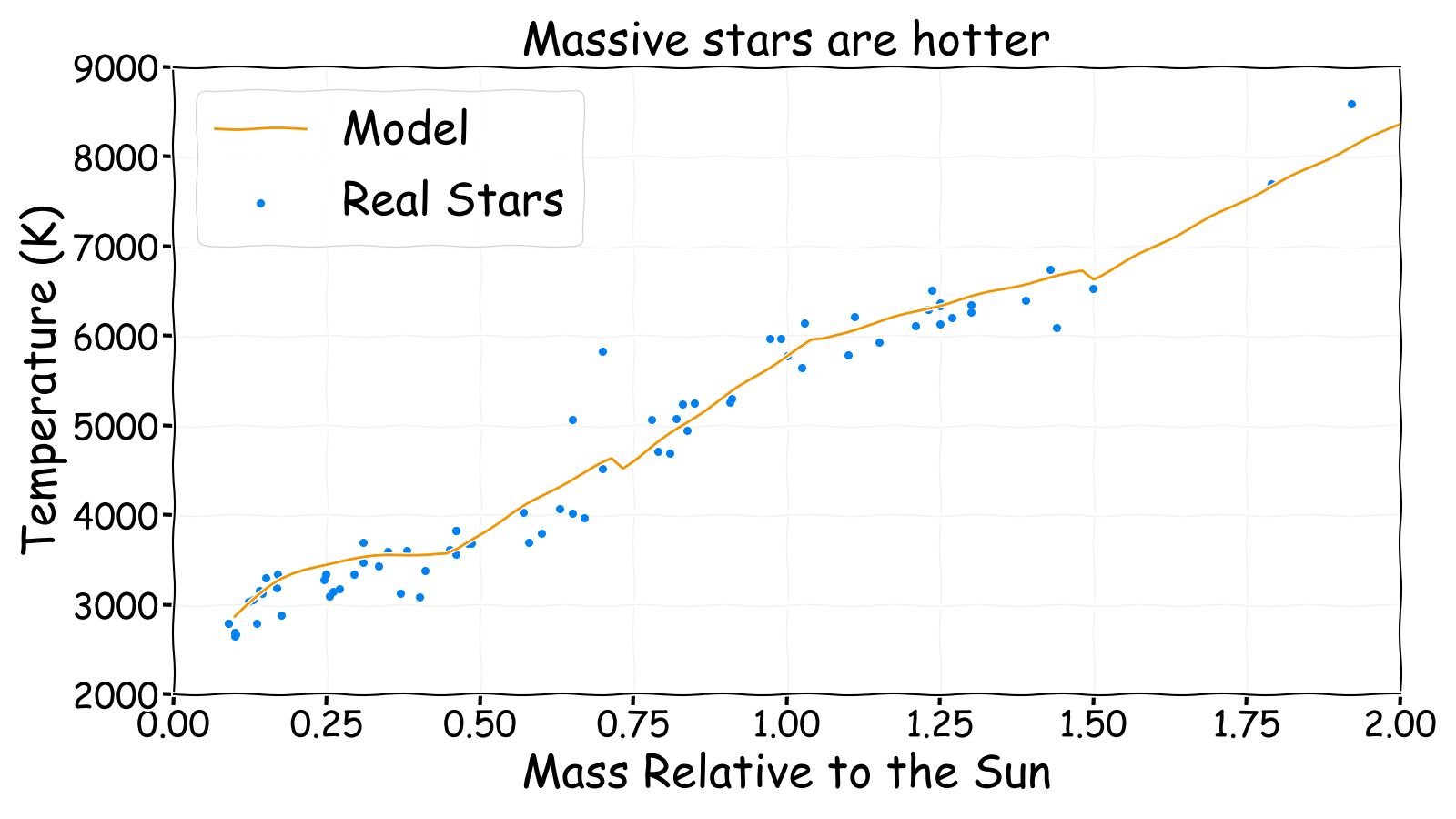 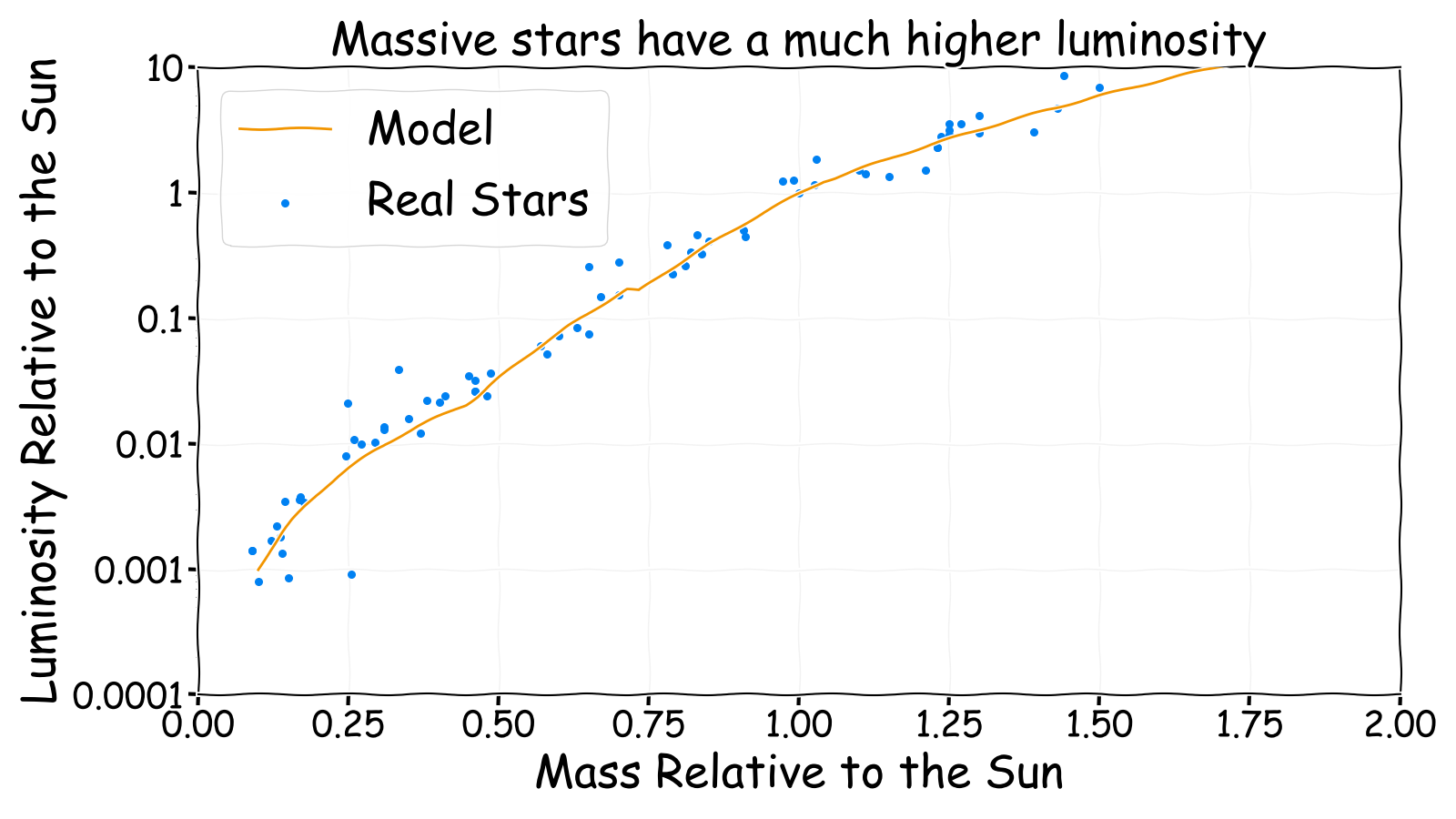